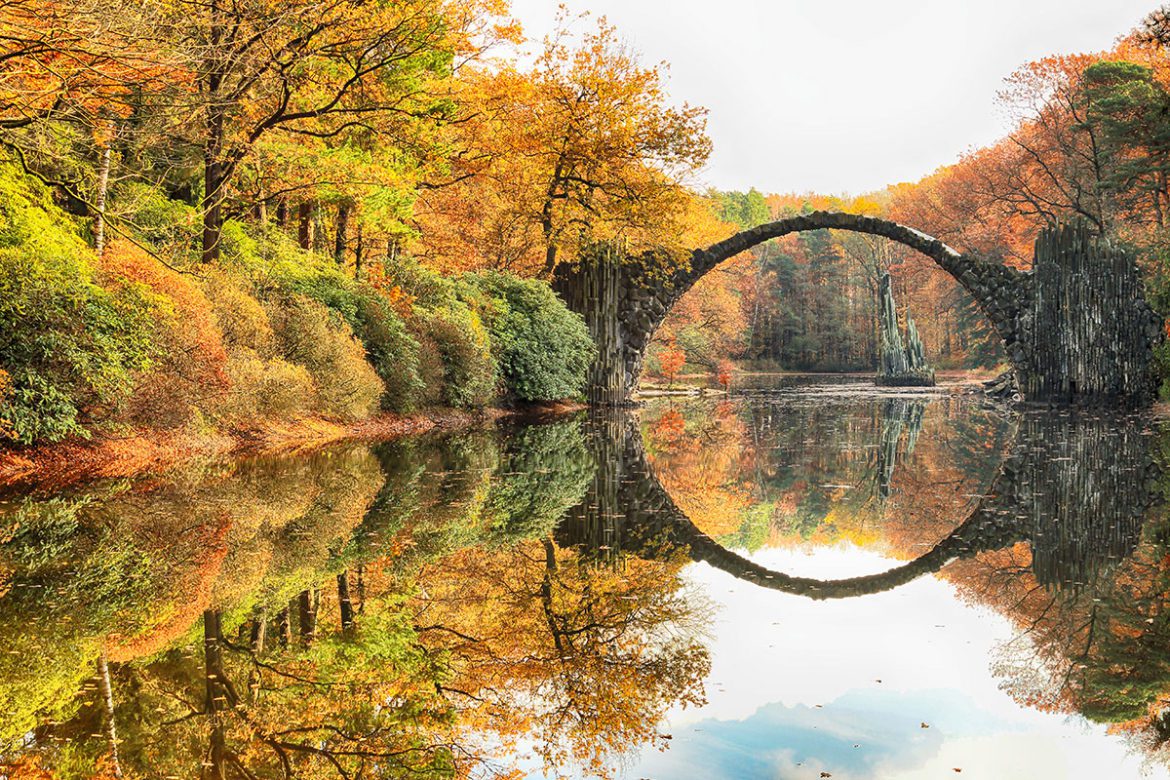 From ancient stepping stones to modern marvels of engineering, bridges are interesting architectural structures that have become part of our history. While many traffic-bearing bridges have become iconic landmarks, footbridges are fascinating in a different way. They often have long histories, and are stunning works of genius designed and built without computers or modern machinery often in the most inaccessible of places.

Pedestrian bridges can be simple and utilitarian or they can be exquisite and creative masterpieces. While the primary purpose of footbridges is to provide a link between two points across water, a valley or a road, they are also often landmarks that are ambitious, inventive and awe-inspiring works of art from end to end. Here is a selection of pedestrian bridges, ranging from the environmentally and socially conscious to those that are downright dangerous and scary.

Commissioned in 1860 by Friedrich Herrmann, the knight of Kromlau, this thin arch is roughly built out of varied local stone and spans thirty-five metres. Because of its unique construction, the bridge merges with its reflection to create a perfect circle regardless of the point of observation.

There are dozens of so-called devil’s bridges located around Europe, all of which are significant technological achievements of their time. Most of them share the same legend: a pact is made with the devil to assist in building the bridge in exchange for the first soul to cross it. The builder always looks for a way to trick the devil, for example, by luring an animal across the bridge first, thereby saving the soul of a human. But the Rakotzbrücke legend ends differently. On completion of the bridge, it was the builder himself who walked the bridge and sacrificed his own life to the devil.

Today, the footbridge can be viewed in the Azalea and Rhododendron Park in Kromlau, but in order to preserve this architectural masterpiece, walking across it is prohibited.

Suspended almost thirty metres above sea level, the rope bridge links the mainland to the tiny island of Carrick-a-Rede. It is thought to have been first erected by salmon fishermen over 350 years ago so they could cast their nets over the edge into the twenty-three-metre-deep chasm below.

When the bridge was originally built it had just one handrail and the slats to walk on were widely spaced, making the rope bridge very dangerous indeed. As fish stocks declined, the bridge was used less and less by fishermen and it is now a tourist attraction. It has been remade a number of times, most recently in 2008 when it was greatly strengthened and complemented with wooden beams and a double handrail. However, crossing the bridge still requires serious nerve as it is incredibly shaky. For those who make it across, the reward is stunning views across to Rathlin Island and even Scotland.

The highest of Singapore’s footbridges, at thirty-six metres above Henderson Road, it connects the hilltops of Mount Faber Park and Telok Blangah Hill Park. Its three-dimensional surface integrates structure and form in a unique series of wave-like ribs that ripple dramatically over and under the bridge deck, creating sheltered seating areas inside every upward curve.

The bridge has become a popular recreational and leisure destination with walkers, joggers and cyclists. Visitors can look over the treetops, observe birds in their natural habitats, and admire the city’s skyline. The bridge takes on a different look at night, with LED lights dramatically illuminating its wave form.

Spanning the Dragon King Harbour River and a highway, this spectacular 185-metre-long bridge is actually three separate footbridges intertwined into one. The three walkways overlap at five points, which provide structural support and offer pedestrians different routes across. The bridge can be accessed from eight different street entrances. Sitting twenty-four metres above the river, boats can cruise under it with ease.

The Lucky Knot Bridge was unveiled in October 2016. As its name suggests, it was inspired by the Chinese knot and was designed by NEXT architects based in Amsterdam and Beijing. More than a bridge and a connection between two riverbanks, it is a key project in developing the area’s public space, and was designed with recreational, ecological and tourist activities in mind…

Out Of This World

Living on the Edge

Castles in the air