This magical medieval experience, hidden in the desert-like plains of Aragón, has to be one of Spain’s best-kept secrets 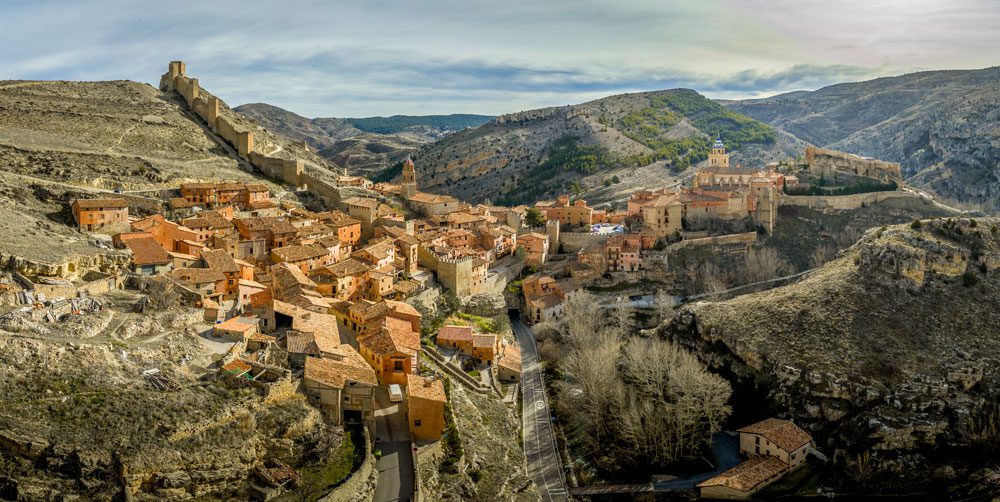 Once the capital of a Moorish kingdom, the small town of Albarracín has preserved all its Islamic and medieval flavour. Perched on top of a mountainous meander of the Guadalaviar River, with its authentic pink-hued buildings, narrow twisting streets and fortified walls, it is one of Spain’s most beautiful towns.

Albarracín has much to offer, whether your visit is for a day, a weekend or a full week. The surrounding area is a Mecca for climbers and walkers, as well as a hub for activities such as horse riding, mountain biking, canyoning and even shepherding.

It is located in the Spanish region of Aragón, two hours from Valencia and forty minutes from Teruel. With limited public transport, travelling by car is the best way to get to this wonderful town and gives the flexibility to explore the surrounding area with ease.

The haphazardly stacked red clay buildings with ornate doorways, tiny windows and carved wooden balconies not only ooze charm but also create a fascinating maze of perfectly preserved medieval mystery. It’s easy to get lost in the streets of Albarracín, both physically and emotionally.

The region was populated during Roman times, as evidenced by the Roman aqueduct which runs 18 kilometres from Albarracín to Cella. However, the town as it exists today began as a Moorish settlement in the early 11th century. Over a hundred years later it fell to Christian rule and eventually became part of the Kingdom of Aragón in 1284.

More recently, local authorities have committed to resurrecting it from near abandonment when it was left in ruins after the Spanish Civil War. Crumbling homes were rebuilt according to centuries-old traditions, and the damaged cathedral was painstakingly rebuilt. This major investment was a big risk, but one which has paid off as tourism is now the town’s main industry.

Albarracín was declared a National Monument in 1961 and is awaiting the outcome of a proposal by UNESCO to award it World Heritage status.

It’s best to arrive early – before the coach tours – and park in one of the riverside car parks at the lower end of town. Comfortable walking shoes are a must as access to everything is on foot, beginning with a heart-stopping ascent up the steps to the main square.

The Plaza Mayor is a beautiful cobbled square with an impressive lookout over the Guadalaviar River through the arches of the town hall. From this central location, many of the main attractions are a few steps away, including the cathedral – Catedral del Salvador– and the adjoining Episcopal Palace. These were built in the 16th century on top of the remains of a 12th-century Romanesque temple. The Diocese Museum, inside the palace, exhibits a valuable collection of flamenco tapestries and religious art.

By around 10.30 in the morning, the bars in the main square begin to attract groups of tourists for almuerzo (mid-morning snack) creating an atmospheric buzz. It’s a pleasant place to rest between visits to other attractions located nearby such as La Casa de la Julianeta, arguably the best example of the traditional architecture in the town, and the toy museum, which children will love.

Beyond the cathedral is the Torre Blanca (White Tower). Once part of Albarracín’s complex defences, this rebuilt 14th-century tower is now an art gallery and exhibition hall spread over three floors, with a viewing terrace at the top offering another impressive view of the city.

Also worth a visit is Albarracín’s crag-top castle, situated in the centre of the original Islamic medina, founded in the 9th century. Everything you can see today has been excavated in recent years from what had become animal pasture. The castle is believed to have been surrounded by a defensive wall to protect it from the Christians, but the fortifications that exist today are much more extensive, built a century later by the Christians themselves.

From the upper part of the town, follow the fortifications up to Albarracín’s highest point, La Torre del Andador (Andador Tower), built by the Muslims in the 10th century as a defensive outpost. The path is steep and rocky but the reward is a superb panoramic view over the town and the unique topography that made its location so strategic.

Having built up a good appetite, there are plenty of good restaurants to choose from, offering a Spanish-style three-course comida at a good price. Reservations are recommended as the best restaurants are usually fully booked.

After a leisurely lunch enjoy a pleasant afternoon following the Paseo Fluvial (Riverwalk) which will take you downstream, back towards the car park at the lower end of town. Rope bridges and elevated walkways traverse the forest floor, passing charming rustic old homes, to where there is a stunning view of the town. The hour-long stroll culminates in the landscaped gardens of El Parque Fluvial where refreshments can be enjoyed on one of the terraces.

Guided tours of the city and various monuments are available but are currently exclusively in Spanish. Find information at www.albarracinturismo.com

How kindness can promote well-being, health and happiness