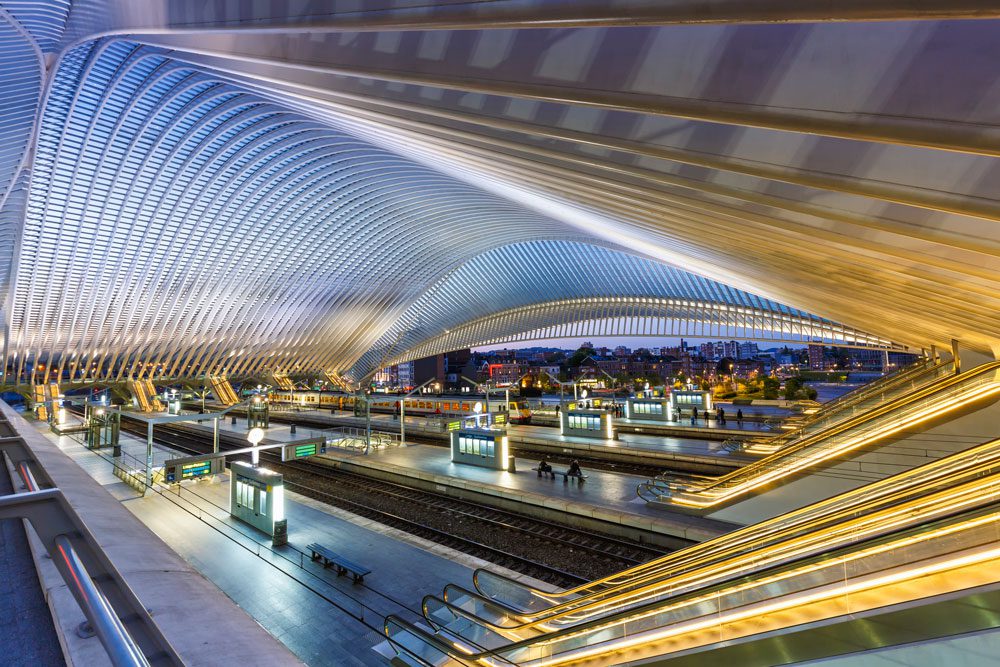 Many of the world’s most iconic and amazing railway stations were built in the early twentieth century during the golden age of railroads when train travel was new, glamorous and exciting. Monarchs, governments and city planners commissioned top architects and engineers to design monumental buildings that made a big impression on travellers. Several of these historic structures still service passengers.

The combination of ‘flight shame’ and the introduction of many high-speed rail routes has brought about a resurgence in long-haul train travel, and a growing number of new stations have been erected in recent years, contributing to the enduring legacy of amazing railway-station architecture. Rail travel is also attractive to travellers who appreciate the benefits of a hassle-free, scenic journey. There’s no need to arrive hours before your train departs, but it’s a good idea to get there with a little extra time to appreciate these places of extraordinary beauty.

This futuristic structure was designed by Spanish architect Santiago Calatrava, who wanted the station to symbolise modern rail travel and the sleek high-speed trains that use it.

With no traditional façade, the building, which was completed in 2009, features a vaulted glass and steel canopy that establishes a seamless interaction between the interior of the station and the city. Massive white beams form an arch over the five platforms offering protection from the elements, particularly the ever-present rain of the Belgian winter. The glass lets in plenty of natural light and is slightly tinted to filter out the sun’s harmful UV rays.

Designed by architect Daniel Burnham and opened in 1908, the building is a masterpiece of Beaux-Arts architecture. It is adorned with elaborate statues, a Vermont marble floor, glazed terracotta columns and gold leaf highlights on the vaulted ceiling.

The design also draws on Ancient Roman architectural styles – the Arch of Constantine inspired the main façade and the design of great vaulted spaces of the interior are based on the Baths of Diocletian.

Union Station has hosted many special celebrations and events including six presidential inaugural balls. Over ten thousand people crowded into the station in 2009 to toast President Barack Obama.

Russia is full of beautiful railway and subway stations and this ornate station, which is Moscow’s largest, is no exception. Designed by Alexey Shchusev, architect to both the Tsars and Stalin, it was started in 1913 and completed in 1940.

The unique combination of styles – Art Nouveau, Rococo and details drawn from the Kremlin – is because the interior work was started before the Russian Revolution and portrays the opulence of Imperial Russia. However it was was completed during Stalin’s reign.

It is the starting point for the Trans-Siberian route from Moscow to Vladivostok, the longest rail journey in the world and the train journey that everyone dreams of taking. The route crosses the enormous breadth of Russia covering 9,258km and takes seven days while crossing several time zones.

This palatial building, surrounded by water on three sides, was built on land reclaimed from the Bosporus Strait, which separates the continents of Europe and Asia. Once the busiest of railway stations in the Middle East, the site was chosen as the northern terminus for the Baghdad Railway and the Hejaz Railway in 1904, and the amazing neoclassical building was completed in 1909. It was designed by German architects Otto Ritter and Helmut Conu, who employed German and Italian stonemasons to sculpt the impressive building. Flights of marble stairs lead up to the monumental façade and the interior is decorated with leafy cartouches, festoons, beautiful cornices, pilasters, balconies and stained glass windows.

This amazing railway station has recently returned to service after being shut for extensive repairs following a devastating fire in November 2010.

Designed by British architect Frederick William Stevens, it was originally named Victoria Terminus to commemorate the Golden Jubilee of Queen Victoria. Each day this very busy hub caters an estimated three million passengers with over 1,250 trains pulling in and out of its eighteen platforms.

A fusion of East and West, the design draws inspiration from both High Victorian Gothic design based on late medieval Italian models, and classical Indian architecture. The interior of the building is outstanding – a ribbed dome rests on an octagonal drum with two levels of stained glass panels on the eight sides, originally designed to reduce the glare of the sun.

Built on the site of a former Benedictine monastery, this beautiful station was opened in 1916. While the Beaux-Arts style building is striking on the outside, it is the elaborate tile work in the main hall of the interior that gives the station its incomparable beauty. The 20,000 glazed blue ceramic azulejo tiles depict important events in the history of Portugal, and the multicoloured panels depict rural scenes and the daily activities of the Portuguese people. The tiles were painted by Jorge Colaço, the most prominent azulejo painter of the time, over a period of 11 years from 1905 to 1916.

Thailand’s southern railway line was completed in 1921, making it possible to travel between Bangkok, Malaysia and Singapore by train. While surveying the railway route, engineers noted the beauty of Hua Hin and when the first section of the line opened in 1911 it became a popular resort town for wealthy Bangkok residents and nobility.

The brightly coloured wooden buildings are Thai in concept and design but also have a Victorian influence. The main building in Victorian style dates back to the mid-1920s. Close to the main building is the ornate Royal Waiting Room, a beautiful teak wood structure in bright yellow and red colours, which was used by the Thai royals when they visited their seaside summer Palace in Hua Hin.

There is also an old steam train on the site that has been converted into a library.