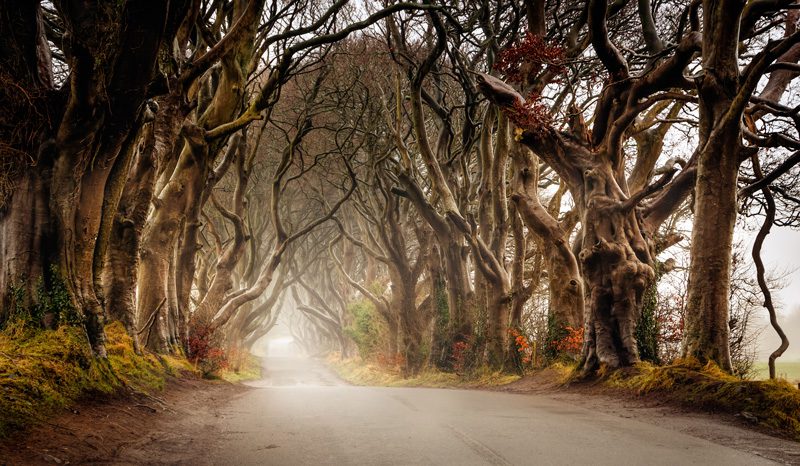 Ireland is well noted for its truly breathtaking natural landscape, and here are some of its most spectacular destinations

With the increasing popularity of staycations, many of us have come to realise that when in search of natural beauty, we need look no further than our own little country. Here are some of Ireland ’s most spectacular and beautiful natural masterpieces that are well worth adding to the list when planning a day trip or a holiday at home.

Lough Tay (Loch Té) or The Guinness Lake is nestled in the heart of the Wicklow Mountains, in one of the most picturesque parts of Ireland.

The lake lies between the mountains of Djouce and Luggala on the Guinness Estate, which was owned by arts patron Garech Browne, the great-great-great-grandson of Arthur Guinness, until his death in 2018. The dark peaty water of the lake combined with the bright white sand on the northern side (which was imported by the Guinness family) makes it look like a pint of Guinness!

Although Lough Tay itself is on private property, a stunning view can be had from the Military Road above, at the junction with the Wicklow Way.

This unique tunnel of ancient beech trees along the Bregagh Road, between Armoy and Stranocum in County Antrim, intertwine and entangle to create a spectacular blend of light and shadow.

The trees were planted by the Stuart family over 200 years ago along the entrance to their Georgian estate. The intention was to create a compelling landscape to impress visitors as they approached their home, Gracehill House, which was built by James Stuart in c.1775. A popular filming location, the Dark Hedges are particularly associated with the HBO epic series Game of Thrones.

Although they remain a magnificent sight, in recent years a number of the trees have been uprooted by storms with approximately 90 of the original 150 trees still surviving. Since 2017 the road has been closed to traffic, due to visitor numbers causing possible damage and degradation to the site.

Resembling the outline of a giant Gothic structure with jagged spires of sandstone, the towering Cathedral Rocks are located on the northeast point of Inis na Bró, meaning ‘island of the quern’. The island is one of six that make up the magnificent Blasket archipelago, located off the most westerly tip of the Dingle Peninsula. It lies southwest of the Great Blasket and north of Inishvickillane. Until quite recently, these dramatic arches were only known to fishermen and passing sailors, but now many of the Blasket Island boat tours take passengers up close to the spectacular rock formation.

The sixteen interconnecting limestone caves of Kesh are located on the side of Keshcorran Hill, near Keash Village in County Sligo, between Ballymote and Boyle. They can be reached by a 200m ascent up a steep grassy slope.

The visually striking caves are imbued with myth, legend and folklore. Cormac Mac Art, High King of Ireland, was reputedly stolen as an infant by a she-wolf and reared with her cubs in the caves. Diarmuid and Gráinne are said to have taken refuge here after their elopement, when being pursued by the furious, jilted Fionn MacCumhail. Another story tells how Fionn and his Fianna were captured and carried into the dark mysterious caves by three vicious hags.

Excavations have led to the recovery of animal bones and evidence of human habitation going as far back as the Neolithic Age.

This lone sea-stack sits close to the edge of the cliffs at Downpatrick Head, an outcrop a few miles north of the village of Ballycastle in County Mayo, that offers a unique view of the Atlantic ocean. The sea-stack Dún Briste, meaning ‘broken rock’, is a spectacular sight as it is made up of layers upon layers of multi-coloured rock strata.

Visitors to Downpatrick Head can also view the ruins of a church, a holy well and a stone cross marking the site of an earlier church founded by St. Patrick.

This outcrop was also the location of Lookout Post 64 EIRE, one of a series of 83 Lookout Posts placed at strategic points along the Irish coastline by the Irish Defence Forces to establish a Coast Watching Service during World War II. The marking ‘64 EIRE’ is still visible, and was an indication to American aircraft having crossed the Atlantic Ocean that they had reached neutral Ireland.

Arranmore or Árainn Mhór is a wild and rugged island 5km off the coast of Donegal. The Arranmore Lighthouse is located at Rinrawros Point at the northwest corner of the island. It has been in existence since 1859 having replaced the original lighthouse which was built in 1798 and de-commissioned in 1832.

These uniquely positioned 151 steps run down along the cliff from the lighthouse to a very sheltered little harbour on the shoreline. They were originally constructed to enable oil deliveries to the lighthouse. Today these steps are a major attraction for tourists visiting the island. An ideal place for a good workout but be cautioned, extreme care is advised while climbing these steps!

Also known as Ilnacullin, meaning ‘island of holly’, Garinish Island is blessed with a sheltered location and unique microclimate. The 37-acre island is filled with stunning ornamental plants and beautiful flowers from many parts of the world. These exotic species are mixed with native Irish plants and remarkable garden structures including a Grecian temple, clock tower, Martello tower and Italian casita.

The island is just 1.5km off the coast of Glengarriff in West Cork, a village that has been famous as a holiday destination since the 1700s. Among its notable visitors was Violet l’Estrange, who spent summers there with her cousins, Countess Markievicz and Eva Gore-Booth.

Violet fell in love with the island and persuaded her husband, John Annan Bryce, to buy it from the British War Office in 1910. Despite her husband being a British MP, Violet’s sympathies lay with the Irish and, in 1920, she was arrested in Holyhead after addressing a public meeting in Wales on the subject of ‘reprisals’. Her two daughters were leaders in the Women’s Coronation Procession of suffragettes through London before King George V’s coronation in 1911. The Bryces’ son, Roland, bequeathed the island to the Irish nation in 1953.

The short ferry trip to the island offers an opportunity to take in some of the most spectacular scenery in Ireland and also the chance to observe and photograph a large colony of seals in their natural habitat.

Hellelil and Hildebrand, the Meeting on the Turret...