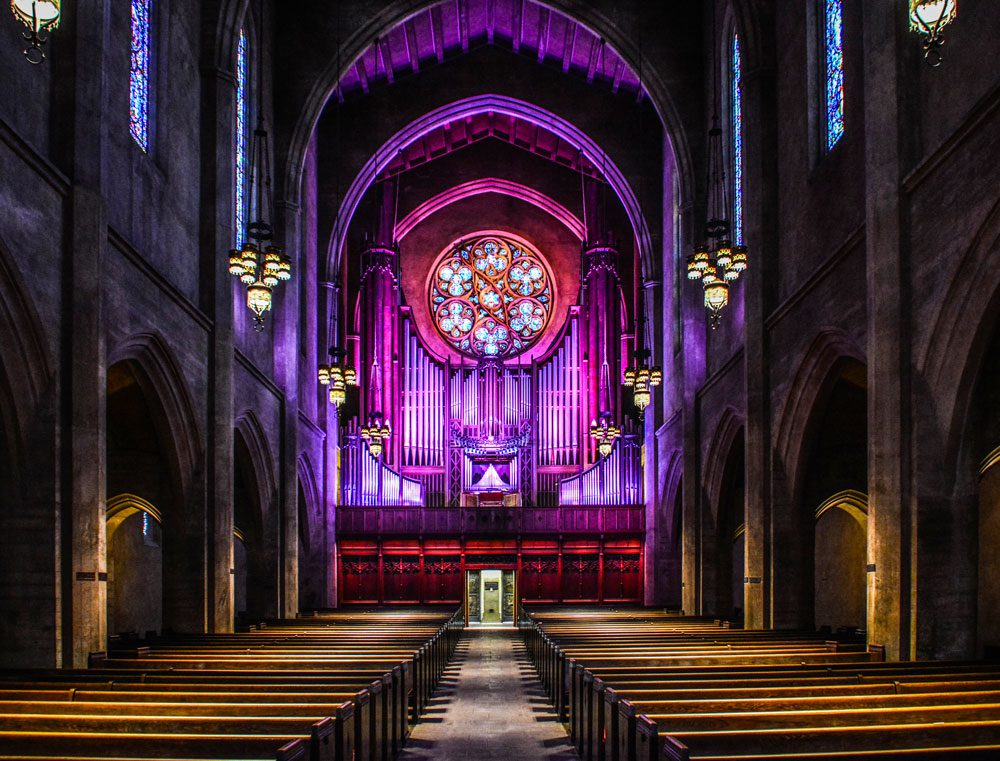 On a visit to his father’s home town, Augsburg, in October 1777, Mozart called on Johann Andreas Stein, the renowned maker of keyboard instruments, and wrote a letter to his father, telling him about the visit:

When I told Herr Stein that I would like to play on his organ and that I was passionately fond of the instrument, he marvelled greatly and said: ‘What, a man like you, so great a clavier player, want to play on an instrument which has no douceur, no expression, neither piano nor forte, but goes on always the same?’ But all that signifies nothing; to me the organ is nevertheless the king of instruments.

Not only are pipe organs one of the most complex and powerful of musical instruments, but they are also the largest instrument in the world, and the largest to be played by a single person. To celebrate the organ, here are the stories of five of the best examples of this magnificent instrument.

Built in the English Gothic Revival style, the First Congregational Church, Los Angeles, serves the oldest Protestant congregation in the city, which moved to its current location in 1932. The church is home to the second largest church organ in the world with over 18,000 pipes, 346 ranks and 265 stops. It is made up of several pipe organs which are collectively known as The Great Organs of First Church.

The 18,000 plus pipes of the Great Organs are distributed over the Chancel, West Gallery, and North and South balconies, creating an immersive surround-sound experience for listeners. The instruments’ main builders are the legendary E. M. Skinner and Herman Schlicker organ building companies. The Great Organs have been recorded and filmed for major Hollywood movies and played by some of the finest organists of the 20th and 21st centuries.

During the Covid-19 pandemic, organist-in-residence Dr Christoph Bull, Dr David Harris, Musical Director at the First Congregational Church, and Laude, the chamber choral ensemble who regularly perform at the church undertook an innovative and challenging project. In collaboration with Irish composer Patrick Cassidy, they recorded Cassidy’s new work, a setting of the Latin Mass for choir and organ.

Due to restrictions, it was not possible to bring the organist, musical director and full choir together. As a result of this constraint, what was achieved reflects the uniqueness of the moment in the context of recording history.

The organ part was the first element to be recorded in the church, eerily empty except for the organist and composer, who were masked and maintaining social distancing. The recording was then sent out to each member of the choir, who recorded their individual parts in isolation.

The choir director became the primary mixing engineer, setting about the slow process of integrating the individual parts one line at a time. The mastering process relied on the time-consuming joint creativity of engineer, director, organist and composer who had to envision new approaches to creating a choral/organ recording synergy, and somehow get everyone into the ‘same room’.

The Mass, a live premiere concert, took place on 19 March 2022, to serve as a way for people across Los Angeles to gather and commemorate the past two years in a healing celebration. Guest host Martin Sheen presented the performance.

Patrick Cassidy’s work is the first symphonic setting of the Latin Mass by an Irish composer. David Harris remarked:

With its underlying principles of peace, mercy, justice and hopefulness, it is a work that speaks to a secular audience as well as to those within the Catholic tradition. These universal messages made the oldest Protestant Cathedral in this secular-identifying city the perfect choice for the premiere. The piece brought focus and healing amidst a number of notable events, including the ongoing pandemic, its second anniversary, Ireland’s centennial of independence, and the continuing energies of so many to fulfil promises of equity in our pluralistic society.

A baroque church built between 1668 and 1693, St Stephen’s Cathedral replaced another church that had been destroyed by a massive city fire in 1662, taking with it the parish’s first organ. Indeed, the site of the cathedral has been home to five churches, the original dating back to 720AD.

With its 17,974 pipes, 333 ranks and 233 stops, the organ in Passau’s cathedral is the largest of all pipe organs in Europe. As is the case with many great organs, it was developed and renovated gradually. It now consists of five separate organs, all of which can be played together from one main key desk. Each of the organs can also be played as stand-alone instruments.

The stucco work by Italian plasterer and sculptor Giovanni Battista Carlone in St Stephen’s Cathe-dral is an essential part of its baroque design. Carlone worked on the richly ornamental, heavy stucco decoration of the cathedral from 1677 to 1683. This magnificent work is not merely decorative but is part of the overall narrative of the cathedral’s design, which integrates architecture, sculpture and painting. In addition to the leaves and flowers, there are sculpted prophets that refer to the content of the frescoes.

Italian-trained Swiss painter Carpoforo Tencalla worked on the frescoes for the nave and choir from 1679 until his death in 1685; his son-in-law, Carlo Antonio Bussi, completed the work. The frescoes depict various scenes from liturgical stories, including The Martyrdom of Saint Stephen, the saint to whom the church is dedicated. The Triumph of the Eucharist is said to be inspired by a painting of the same title by Peter Paul Rubens, now in the Museo del Prado in Madrid. The overall theme of the work is typical of the baroque style of the time, a stringent, doctrinal style of Christian art influenced by the Catholic Counter-Reformation.

Notre-Dame cathedral, one of the most celebrated cathedrals in Europe and one of the finest examples of French Gothic architecture, has three pipe organs, one of which is an instrument of great historical importance. Its 8,000 pipes, five keyboards and 109 stops make it France’s largest organ and one of the most famous in the world.

The original organ was built by Frédéric Schambantz and dates back to 1403. Twelve pipes and some wood still survive from this early instrument. Between 1730 and 1733 the current organ was constructed by François Thierry. In 1868, the distinguished organ builder Aristide Cavaillé-Coll completed a major restoration. Since then, the organ has undergone several renovations and upgrades.

Many organs in France were destroyed during the French Revolution when organ pipes were melted down by the revolutionaries to make bullets. Notre-Dame Cathedral’s Grand Organ survived because the astute organist-
in-residence at the time regularly played La Marseillaise to placate the revolutionaries.

The fire and restoration

On 15 April 2019, Johann Vexo was playing the ‘grand orgue’ at evening Mass when fire broke out. Following the fire, the organ remained mostly intact but there was severe heat and water damage.

Restoration of the organ is still ongoing. It has involved the removal of its expansive keyboard console and dismantling all 8,000 pipes. Each piece has to be cleaned and individually restored before the instrument can finally be reassembled. It will then take about six months to tune the organ before it can be played again. The aim is to have the restoration completed by 16 April 2024, just over five years since the fire.

Tawny Chatmon: If I’m no longer here, I wanted you to know